The new year is rapidly approaching. One of my personality quirks is I find it hard to maintain focus. In an attempt to keep my eye on the next project in the line-up I thought I would share my work schedule with you-give you a glimpse into the work coming up during 2014.

1. January will see the publication of my first sequel. COSMIC CHAOS will come to life. 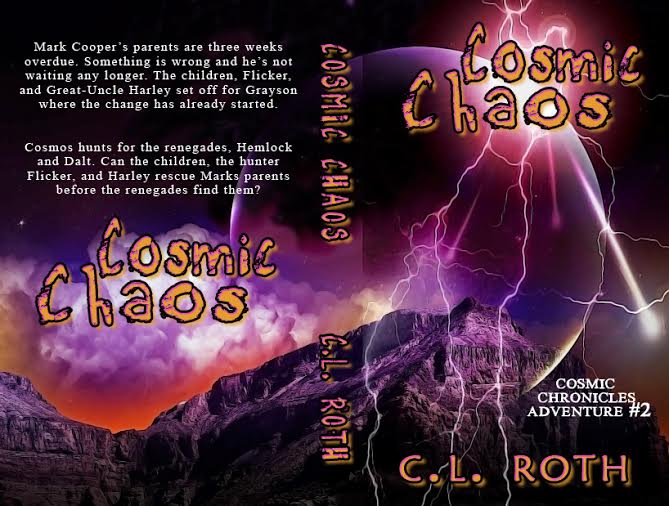 2. Sometime in May, I plan on putting out my first book as a publisher. C.L. Roth Publishing is working with William F. Roth (yes, he is my brother) to put out his debut novel: Two Leaf’s Notebook.

A young girl returns to the home of her Aunt Tooley and walks into a mystery that warps the very fabric of time.

3. In August I plan on pulling my work in progress off of Wattpad. The Beginning is the working title. I don’t have the final title yet. I may have to hold a contest or something. But right now The Beginning can be followed at Wattpad: http://www.wattpad.com/story/5667824-the-beginning   There are eleven chapters in place and I’ll continue to add to it until about the time Two Leaf’s Notebook goes live. At that time I’ll pull it down, revise and polish then fire it to the editor to get it ready for publication.

The Beginning: Four strangers, led to a house deep in the Missouri Ozarks, must band together and learn to use their new skills in order to fight an unworldly threat to mankind

4. Right before Christmas I plan on launching book #2 of the Weary, Kansas series. A Weary Christmas is scheduled to hit by Christmas 2014.

2014 is one of the busiest writing years I’ve ever had. In addition to the writing I’m starting to put in place several live presentations. Once those are locked in I will add them to my list.

Time is flying. I just wanted to take time to update my news and inform any of those watching what to look for from the fertile imagination of C.L. Roth.

C. L. Roth was born and raised in Kansas. She has a deep love for the prairie state, the Flint Hills in particular. She is married, has two sons, four grandchildren, is an artist, writer and full-time caregiver. Life experience has taught her that normal doesn't exist, it's the journey that matters, and the best way to succeed is simply: Never Give Up.
View all posts by C. L. Roth →
This entry was posted in Writing. Bookmark the permalink.

This site uses Akismet to reduce spam. Learn how your comment data is processed.